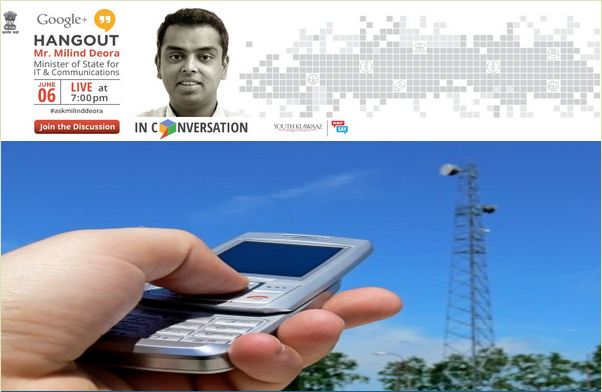 With Tele-density having increased from 7.04% to 73% in the last 9 years, the monumental rise in the telecommunication infrastructure has also seen a growing awareness of possible health hazards owing to emissions from cell towers and mobile phones. The Ministry of IT and Communications has the unenviable task of balancing the real need for better connectivity on the one hand and a burgeoning fear of the ill-effects of such growth. Mr.Milind Deora, the approachable Minister of State for IT & Communications as well as the MP from South Mumbai is keenly aware of the situation and always extremely responsive to civil societies need for improved policies and guidelines. He has recently had a contentious clause allowing the installation of cell towers at all places removed from the draft DoT guidelines on the official website. This is despite having explained the rationale for including it in the first place to his constituents at a town hall organized recently in Mumbai where he shared that the Department believed only those norms that were appropriate and safe for ALL citizens at ALL places, without discrimination, should be adopted. On a special request by the civil society, the Minister has not only put on hold these guidelines from coming into effect on the 1st of June but also organized on his own initiative a team of DoT officials from Delhi to come down to meet with representatives of civil society in Mumbai on the 4th of June to enable a further exchange of ideas before the guidelines are put into effect . The Minister who is constantly having to deal with the backlash of citizen’s misinformation about the jurisdiction of governance is clearly a concerned citizen first himself when he clarifies that “The Government of India does not have the powers to make guidelines binding on local bodies. It is up to States/ Municipalities/ Panchayats to apply their own wisdom and frame rules. I can only hope that they will take into account our concerns and suggestions. In fact I would urge activists in Mumbai to pressure Municipal councillors to get BMC to adhere to our advisory.

No Local Body Tax till consensus

The recent strike by the traders against Local Body Tax (LBT) in Maharashtra and in Mumbai, in particular, was unfortunate. LBT, is a replacement Octroi, one of the most regressive taxes in the world, and was proposed to be introduced in Mumbai from October, 2013. Mumbai is one of the world’s only cities that continues to have Octroi. The Trading communities were not happy with the tax structure and were having some grievances which resulted in a strike for almost a month. They had apprehensions that certain powers given to the municipal staff might result in undue harassment of the traders. A delegation of the trading community had met Mr. Milind Deora to forward their grievances to the Chief Minister of Maharashtra. He had met the CM thrice on this issue. During the first meeting, it was proposed to form a committee of five members from the Trading Community to understand the implications of introducing the LBT and formulate a plan to remove this Tax structure. He also met Mrs. Sonia Gandhi regarding the same. Finally, it was announced in a meeting with traders’ representatives arranged by Mr. Milind Deora that LBT will not be enforced in Mumbai until there is a consensus between the trading community and the Maharashtra Government. 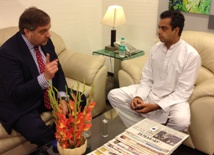 In a meeting with Spain’s Ambassdor H.E Gustavo De Aristegui in New Delhi to discuss bilateral opportunities in the Telecom and Maritime sectors on 28th May, 2013.

In a meeting with Commanding-In-Chief Western Naval Command 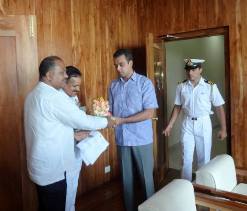 In a meeting with Vice Admiral Shekar Sinha, Commanding-In-Chief of the Western Naval Command and South Mumbai MLA’s to discuss affordable housing solutions on naval land on 21st May, 2013.