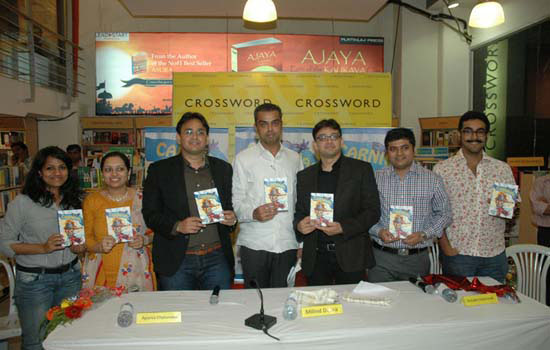 “I’m a biography reader, especially of musicians in their sixties and seventies who have found a sudden need to pen their lives,” says MP Milind Deora at book launch of Carnival Short Stories.

This was the candid confession made by Shri Milind Deora (Member of Parliament) at the launch of Carnival Short Stories, a collection of fifteen stories by eleven authors picked from Litizen.com, where he was the chief guest. The book launch was hosted by Apurva Chaturvedi and Rishabh Chaturvedi, co-founders of litizen.com and had authors Rohit Das, Aparna Sundaresan, Dushyant Shekhawat, and Ketaki Patwardhan in attendance. Carnival is a collection of fifteen tales that cover genres like adventure, science fiction, fantasy, thrillers, literary, historical, humor and many more. This is the second anthology by litizen.com which follows in the footsteps of the popular Labyrinth Short Stories.

On being queried about his reading preferences, Mr. Deora said he was a voracious reader on his I-pad and mobile phone, and though there was a time when he could read news papers for hours, he now consumed news in snippets of 140 characters. This more or less summed up the essence of the discussion of the evening.

Litizen.com, which is a writing platform that allows authors to create their profiles and share their stories online, launched Carnival Short Stories at Crossword Bookstore, Mumbai. In Rishabh’s words, the first book by Litizen.com – Labyrinth Short Stories – was a runaway hit with the fourth print run in the market and the book climbing the bestseller charts of chain and online stores. Rishabh thanked the authors who write regularly at litizen.com, and said that without them none of this would have been possible. “Litizen.com is open to all writers and we have writers from across India and the world contributing to the site. It is free for any writer to join and share their stories.

Carnival is a book of 15 stories by 11 authors, and it was possible only because of Litizen.com. We have a huge range of stories to choose from and in such diverse genres that we absolutely had to publish a multi genre collection. Digital content is not the future, it is present. It is how you navigate the territory which is important. Ten years from now the publishing scene could be very different from what it is today.”

As a Minister of telecommunication and information technology, Mr. Deora said it is always exciting to encourage young people doing interesting things and transforming the landscape in literary, music, entertainment and informative space through the internet, calling the writer’s network, the youtube of literature. He said, “Litizen.com’s initiative of inspiring and promoting upcoming authors across India will go a long way in putting forth the unseen talent of our country. We need such platforms for the youth today. Fiction, non-fiction, poetry, essays – whatever be the form, the need to get them interested in literature is now more than ever. With books like Carnival and Labyrinth, Litizen is bridging the gap between traditional and digital publishing, while they provide new talent and voices a solid platform.”

Internet has disruptive powers, which Mr. Deora and co-founder of Litizen.com, Apurva Chaturvedi both agreed. “Internet and communication technologies have changed so many sectors. I cannot think of anything else, but the internet, that’s brought a 180 degree change in the music industry. So many sectors in the brick and mortar stage are constantly evolving. I’m very excited about the internet in India. I’m happy to be heading the ministry which has transformed the internet usage in India. Over the past decade, internet connectivity has gone up from 10 lakh internet users using dial up modem connection to 24 crore active internet users who are accessing internet on their mobile without even knowing about it,” said Mr. Deora.

On being asked why litizen.com focussed on publishing short stories, Apurva Chaturvedi, the founder said this, “it was inevitable to publish this book after Labyrinth’s success. Infact it was the trade, the retail and the distributor, which told us to come out with the second book, seeing the popularity of Labyrinth. Carnival is a multi genre anthology. Most authors are different from the ones published in Labyrinth, and it makes us really happy that we are able to find such talent, and publish their stories. I feel short stories is an unexplored territory in Indian publishing, like genre fiction. Considering the success of genres like romance, mythology, thrillers which have recently come out of Indian publishing, it suggests Indian readers were waiting for these books.”

Mr. Deora anointed the founders of Litizen.com as Chaturvedi Brothers, and said that they were getting the right mix of online and offline. “There was a trend that brick and mortar would move online. And then there was a stage where it was said that online is not enough and things will move back to brick and mortar. Now we’ve reached a stage globally where both can co-exist and I believe what litizen is doing and what it’s done with both its books is a great example of that where both coexist peacefully. Where both online and offline space are just as exciting. I would like to congratulate them for being one of the first people in India who are doing this, and probably in the world.”

The other authors present for the book launch were, Mrs. Ketaki Patwardhan, Mr. Dushyant Shekhawat, Mr. Rohit Das and Ms. Aparna Sundaresan. Aparna, who is also the editor of the anthology, and has done MA in creative writing from University of Warwick, UK, said: “Working on Carnival was a stimulating and learning experience. Stimulating because I was exposed to some immensely talented writers in our country. As a writer myself, I learn best from reading other people’s work, so I had an amazing well of knowledge in Carnival.”

All the authors ceded that had it not been for the online platform, perhaps the book would have not come by, which validated what the Mr. Deora and the Chaturvedi Brothers had said earlier. Rohit Das mentioned, one of the early joiners of Litizen.com said, “We have grown from 6-7 authors to more than 1000 now. Everyone who writes should submit their stories on litizen.com as it has a dedicated team of editors, and also a following from readers who actively read and comment.”

The evening ended on a light note with Mr. Deora confessing that a book like Carnival is perfect for a reader like him. “I am not much of a fiction reader. I guess that’s because I have pretty much a good imagination. But Carnival is perfect for a reader like me. It is short and easy to consume. I could probably read some stories on my way from here to the next destination.” He was particularly interested in the thriller story penned by Dr. Ketaki Parwardhan – The Girl on Train. And if it wasn’t enough that he was starting to read fiction, he even expressed his willingness to turn writer. “Maybe I’ll contribute for litizen.com and their next project. A story,” he said.
Source: Youth24x7.com
Reference Link: http://www.youth24x7.com/specials/item/643-milind-deora-launches-carnival-a-book-of-fifteen-stories