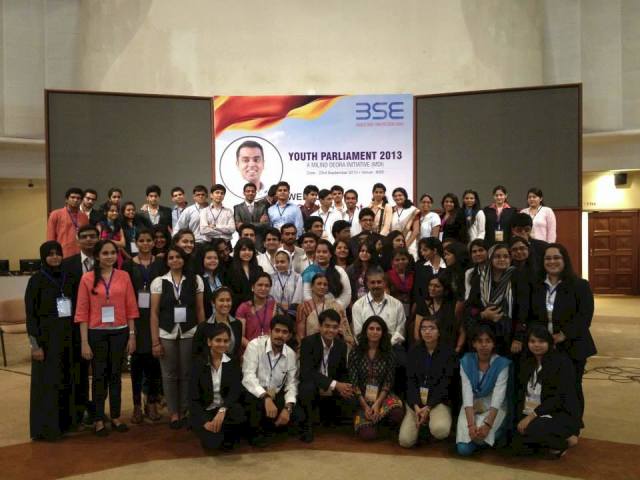 Youth Parliament was held on 23rd September 2013 for the second time since its inception in 2012 and it saw the participation of hundred students from across 20 Mumbai colleges. The students participated in mock parliamentary proceedings held at the BSE Ltd convention hall where Mr. Sachin Pilot, Minister of State of Corporate Affairs was the chief guest.

Youth Parliament is a mechanism to involve the youth in an interactive session that replicates the functioning of the real parliament. This exercise helps youngsters understand the key to effective debate and discussion. It also teaches them respect towards others opinions and develops the ability to arrive at a collective decision after discussion. Mr. Deora, in his opening address, said, ‘I hope it will encourage more youngsters in our country to watch the Parliament’s proceedings live, hold us legislators more accountable for our in-house conduct and eventually, help them shed their cynicism associated with politics.’

Keeping in line with the objectives of this initiative, the Youth Parliament Agenda 2013 was based on the lines of actual parliamentary proceedings, with a Short Duration Discussion followed by a Zero Hour. Thereafter, time was allotted for Legislative Business, which includes introduction of legislative bills for discussion and voting for passing as law, as well as Private Member’s Bills. The session also included a discussion on matters of public importance, which is an ‘open house’ for raising issues that are extremely urgent, important to the public and thus require the Government’s attention. Various pertinent issues such as Direct Benefit Transfers, the Juvenile Justice Act, mobile tower radiation, the re-organization of Telangana state, FDI in retail, uniform civil code, the fiscal deficit and the NRHM were also discussed by these students in great detail.

Therefore, this initiative was successful in attaining its objectives as it provided an opportunity to the future leaders of the country to delve into the legislative arena and gain knowledge of political discourse and etiquette.