Few weeks ago, the front page of this newspaper carried a story with the headline — ‘What has he done for Bengaluru?’ This outburst was attributed to a prominent Bangalorebased, civic conscious, corporate professional reacting to news of his former colleague’s plans to contest elections to the Lok Sabha. The MP aspirant then earnestly started meeting residents of Bangalore and solicited suggestions. “Broaden footpaths, increase police staff strength, keep pubs open until 4 am, need a flag down taxi system, better roads, garbage recycling” etc were few among the hundreds of suggestions that poured in on twitter as “ideas for the city” in response to this aspirant’s request. Presumably, the educated elite of Bangalore harbours hopes that this individual if elected as their MP would be able to make all these wishes turn real. An anecdotal survey of people in the five biggest cities in India reveals similar expectations of an MP. Can an MP really change living conditions and civic infrastructure in the constituency he/she represents? No. The MP cannot and is not expected to, as per the framework of our democratic structure. So, who can? What does an MP do then? Let’s start with busting some misconceptions. 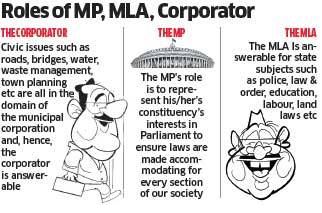 Myth 1: It is a hierarchical system — MP is the most powerful elected representative of a voter.

An Indian citizen directly casts his vote for 3-4 different offices — MP, MLA, Corporator and in some cities, the Mayor. The most common misconception is that these offices are structured hierarchically, almost like a corporate reporting structure. The MP, MLA and corporator are all independently elected officers with no reporting structure. Hence, one is not more “powerful” than the other, they merely have different roles to perform. While it is true that a larger number of people elect the MP vs the MLA vs the Corporator, that does not imply a power structure among them. They are all equal in their powers to execute their responsibilities and no one reports to the other.

We often tend to think of government as one all-encompassing entity, which may be true for political scientists in their research but not in real life. It is important to understand the different arms and responsibilities of the government. The recent unfortunate incidents of rape can be used as an example to highlight the differences in responsibilities among the various elected offices. Lack of adequate street lighting (say) as a cause for the crime is the failure of the local corporator for that area and deserves to be questioned for it. The lack of adequate police security for citizens is the role of the state and the MLA needs to be questioned for it. And the lack of respect for women in our society and potentially high unemployment which can exacerbate such crimes is the responsibility of the Centre and we have the right to question our MP over it. But protesting against the ‘government’ and holding every government official responsible for it is an inefficient form of protest and leads to muddling of behavioural outcomes.

Myth 3: My MP is my one-stop shop for all problems.

Few years ago, in Mumbai, one housing society, home to educated and rich people, was vexed with their MP for not being able to help rid their sea-facing garden of monkeys! Not to belittle monkey menace but this notion that an MP is a one-stop shop for all problems is a pervasive notion but a false one. While the concept of a one contact point for all problems may be a sound one, our current framework does not allow for one and the MP, MLA and corporator each have different roles.

What exactly are the defined roles of an MP, MLA and a Corporator?

Shocking as it may sound, none. And therein lies the problem — there is no defined ‘job description’ for an MP, MLA, or a Corporator. Broadly, the MP represents his/her voters’ interests to legislate affairs in Parliament. The MLA does the same in the state and the Corporator in the municipal corporation. Hence, it may be easier to draw boundaries of their job responsibilities based on the roles of Parliament, state legislatures and municipal corporations. Civic issues such as roads, bridges, water, waste management, town planning etc are all in the domain of the municipal corporation and, hence, the corporator is answerable. The MLA is answerable for state subjects such as police, law & order, education, labour, land laws etc. The MP’s role is to represent his/her’s constituency’s interests in Parliament to ensure laws are made accommodating for every section of our society.

It is very important as citizens to hold each elected representative accountable for the office they are responsible for. For example, if a corporator knows that the voter will hold the MLA and/or the MP responsible for his failings, it increases incentive for the corporator to underperform and damage credibility of the MLA or the MP. Similarly, if we do not hold our MP accountable for national issues and instead evaluate them on local civic issues, we do not incentivise the MP to ask more questions in House.

It is understandable, given the apathetic state of polity and governance, that very often citizens feel frustrated and helpless and rush to anyone that is elected, to air grievances and seek help. But that is unlikely to lead to solutions and it is in our best interests to ensure that we hold the right people accountable for the right issues. In the Lok Sabha polls, ask your MP candidate the right and relevant questions. Perhaps, Bengaluru with its civic minded citizens can lead the way?

(Co-authored by Praveen Chakravarty, a board member of Centre for Civil Society)